Helmets have come a long way both in terms of design and the safety they provide. With each passing year, there's new and better technology and updated safety standards. However, not all helmets are created equal, with some having the latest and greatest technology, and others, including some of the most recognizable brands, not having yet adopted some of the latest protocols.

Introducing Mips, or Multi-directional Impact Protection System. Mips is a safety technology for helmets. In the event of an angled impact MIPS can reduce harmful rotational forces, which may be transmitted to the brain, by allowing the helmet to slide relative to the head. These rotational forces can cause concussions or even worse brain damage.

The technology was developed by specialists at the Royal Institute of Technology and a brain surgeon at the Karolinska Institute in Stockholm, Sweden. 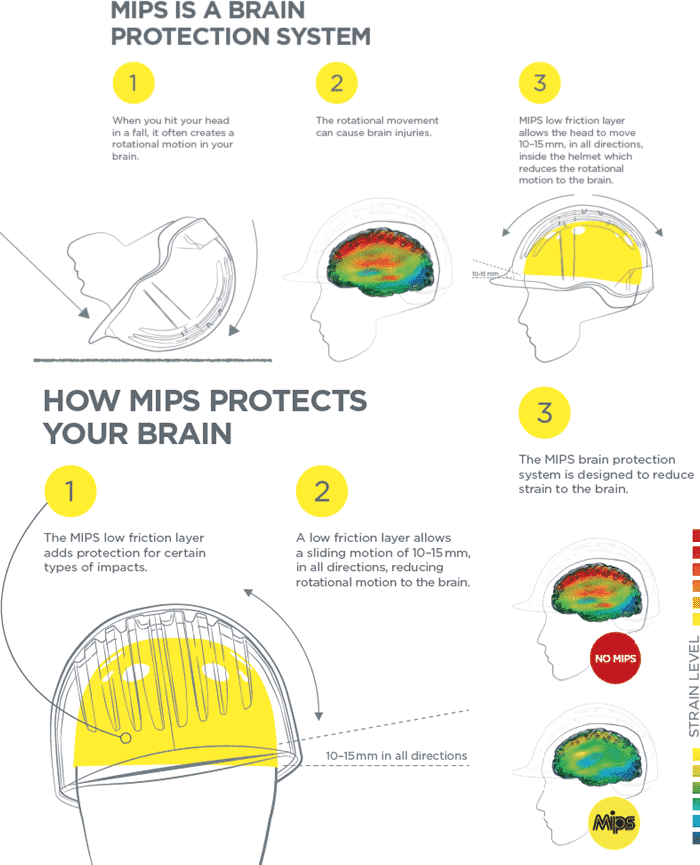 To understand the functionality behind MIPS BPS, it is important to know what rotational motion is, and why it is so harmful to the brain. Rotational motion, in this case, is the result of the brain continuing to move or stretch after the head has come to a quick and sudden stop following an angled impact. Several researchers have linked severe brain injuries like Diffuse Axonal Injury (DAI) and Subdural Hematoma (SDH) to the transmission of rotational motion to the brain from angled impacts. Mild Traumatic Brain Injury (MTBI) or concussion is also believed to be caused by rotational motion.

In a helmet equipped with the MIPS technology, a low-friction layer allows the helmet to slide relative to the head, resulting in a reduction of the rotational motion that may otherwise be transmitted to the brain. In this way, the MIPS approach mimics the natural safety system of the human head. The brain is surrounded by cerebrospinal fluid that protects it by allowing the brain to slide inside the skull when exposed to an angled impact. Mimicking the cerebrospinal fluid, MIPS adds a low friction layer that enables a relative movement of 10–15 mm between the head and the helmet in any direction.

Do your research when looking for your next helmet, and make sure that it has Mips! Charles Owen, Champion, Tipperary, and One K all offer attractive helmets in a range of price categories that include this life-saving technology.